The history of the Country Dance Society, Boston Centre is primarily a history of people. Without the contributions, vision, energy, interest, and/or money of each of these people, the Country Dance Society, Boston Centre would not have come into existence or continued to exist over the past eight-plus decades. Here is an introduction to some of those important individuals:

Cecil Sharp (1859-1924) was an English musicologist, folklorist, music teacher, frustrated composer. In 1899 he saw Morris dancing for the first time. He became a collector and teacher of traditional English dances and in 1911 founded the English Folk Dance Society (EFDS) to further the cause of restoring these traditional dances to the prominence he felt they deserved. He directed a summer school at Stratford-on-Avon where English traditional dances were taught and danced.

George P. Baker was an American-born professor of Dramatic Literature at Harvard. He went to Stratford-on-Avon in England in 1912 where he saw Sharp’s dancers. In 1913 he brought one of Sharp’s EFDS dancers, A. Claud Wright, a “very attractive man,” to America to teach these dances. Claud Wright taught classes at Chocorua NH, Lincoln, MA, and elsewhere.

Helen Osborne Storrow (1864-1944) was a wealthy Boston woman who was interested in music and dance. She formed a School of Dance in Boston where women (there is no record of men attending the classes) enjoyed various kinds of dancing, including international folk dancing. There was a great emphasis on physical fitness in the early part of this century in this country, and Mrs. Storrow was interested in international folk dancing in part because it encouraged good posture, was healthy, and was fun.

In December of 1914, Cecil Sharp came to the US, the first of several trips he made back and forth across the ocean between 1914 and 1918. His primary reason for coming in 1914 was to direct the dancing in a masque, a current production of “A Midsummer Night’s Dream” (produced during the spring of 1915). His second reason was to interest Americans in forming a U.S. branch of the EFDS. He was asked to direct a summer school in Eliot, Maine, where he and his dancers taught English dancing. He also traveled to various U.S. cities to drum up interest in an EFDS American branch.

In Boston, Cecil Sharp found already high interest in English dancing, due to Claud Wright’s visit and teaching the previous year and to Helen Storrow’s embracing of this dance form. Claud Wright had laid a foundation for Cecil Sharp’s work in this country, as had Mary Neal and Florrie Warren on their 1911 tour of the U.S.

On March 23, 1915 at a meeting held at the Colony Club in NYC, the United States Branch of the English Folk Dance Society was established. The object of the Society (from the preamble to the U.S. Branch Constitution) was “To disseminate a knowledge of English Folk-Dances, Singing-Games and Folk-Songs and to encourage the practice of them in their traditional forms.” George P. Baker was elected the first president and Helen Osborne Storrow was elected secretary. Mrs. Storrow was elected president the following year, 1916, a position she held until her death in 1944.

In 1915 there were four to seven EFDS centers or branches in the US: Boston, New York, Pittsburgh, Chicago, and possibly Cleveland, Cincinnati, Rochester, and/or St. Louis. In most of these cities there was someone with money, usually a woman, who was interested in supporting these new centers of the EFDS and in getting more English dancing going. In Boston that person was, of course, Helen Storrow, who had money, time, energy, and a love of dancing.

In 1915, Mrs. Storrow asked Mr. Sharp to “send us a teacher.” She wanted a man teacher but because of the war, there weren’t any. 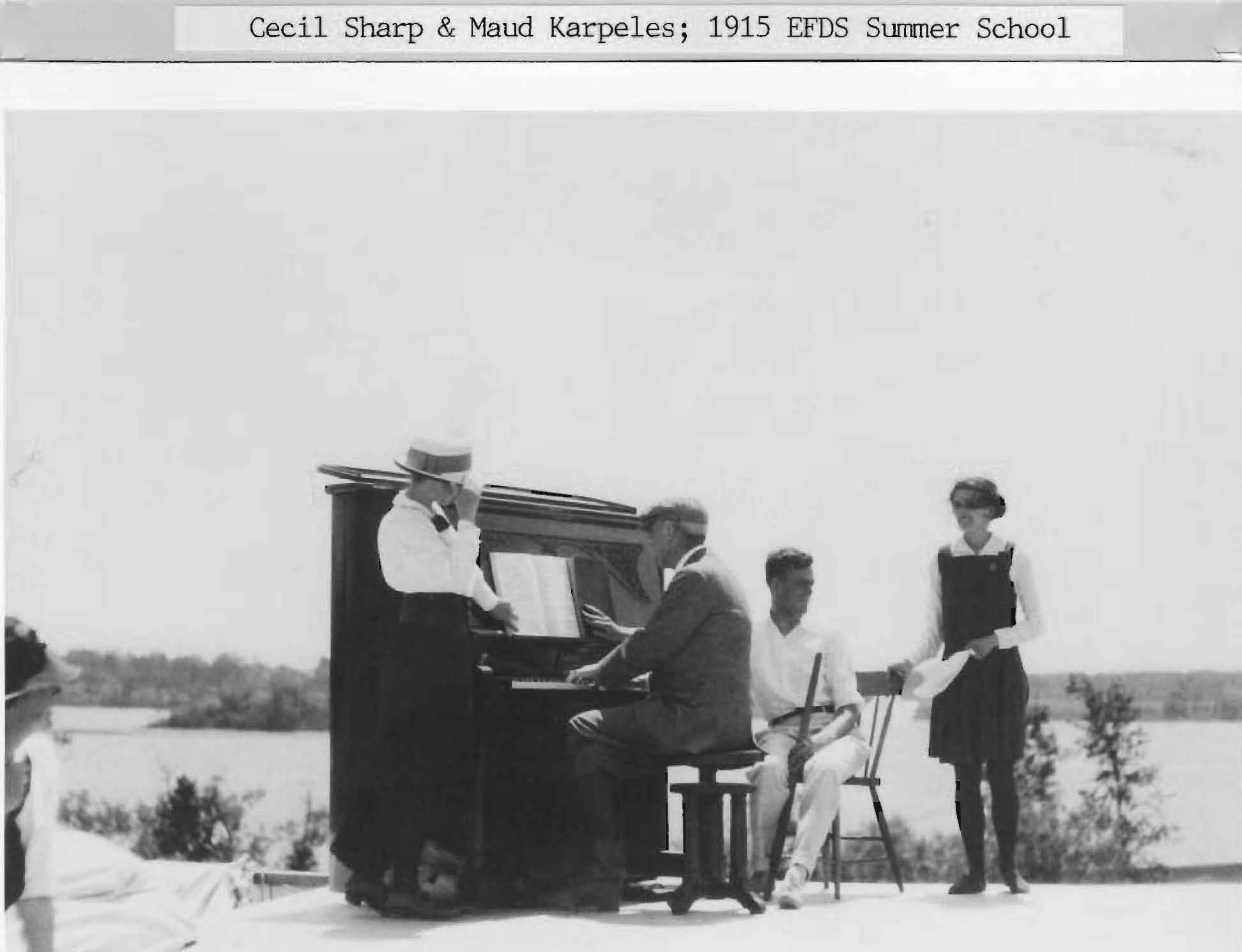 In 1915 Lily Roberts, one of Sharp’s Stratford-on-Avon teachers, came to help Sharp with the masque interludes he was arranging, to teach dancing at the Eliot, Maine summer school, and to direct folk dancing for a pageant at Wellesley College. Lily Roberts “came under Mrs. Storrow’s wing.” She and Mrs. Storrow changed the School of Dance into a place for teaching English country, Morris, and sword dancing; this School of Dance was, in a way, “recycled” into the Boston Centre in the spring of 1915.

Summer sessions of dancing were held in 1915 at Eliot, Maine and in 1916 and 1917 at the Mass. Agricultural College (now UMass/Amherst). Teachers at the 1916 Amherst summer session/camp (“under the personal direction of Cecil Sharp” ) were Maud Karpeles, Lily Roberts, and Nora Parkes Jervis. (There were interpersonal tensions even then in the dance world. Maud Karpeles and her sister were not pleased, for some reason, with Claud Wright, so he was not invited back to the U.S. after 1914. And Cecil Sharp had a falling out with Mary Neal even earlier.) 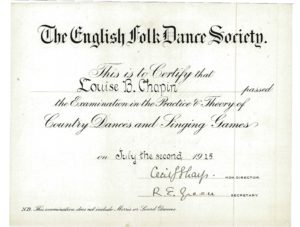 Louise Chapin became interested in dancing in 1913 or 1914 on Mrs. Storrow’s lawn at the Storrow estate in Lincoln. She and Dorothy Bolles, two adventurous young women, went to England to Cecil Sharp’s summer school, learning directly from Sharp and coming back to teach in the Boston Centre. Louise Chapin became the head teacher of the Boston Centre, following Lily Conant’s marriage. Louise Chapin in Boston and May Gadd in New York were the “grande dames” of English dancing in their respective cities. Dorothy Bolles also taught in Boston and at the Amherst summer schools.. In these early decades of the Boston Centre, the classes were subscribed classes, some separated by gender and age; some were more ritual, some more English country.

During the years from 1918 to about 1927, the number of branches of the U.S. Branch of the EFDS dwindled to two, Boston and New York. Strong, interested people in both cities kept the dancing going. The two branches had little contact with each other, though each retained affiliation with the Society in England. In 1927 the Boston and New York branches merged, cooperating to revive the Amherst summer school, which had not been held since 1917 (though both New York and Boston had run summer schools during the earlier years of the ’20’s). Several EFDS-U.S. annual meetings were held in Amherst in the late ’20’s. In 1932, Mrs. Storrow invited teachers from the Amherst summer camp to a Girl Scout camp she had started on Long Pond in Plymouth. The following summer she suggested that the summer dance camp transfer from Amherst to the camp on Long Pond, which it did. Except during one or two of the World War II years, dancing has continued each summer since then at Pinewoods Camp.

(An interesting historical note: Mrs. Storrow was very instrumental in the early years of Girl Scouting in this country. She founded Our Chalet in Switzerland and started a leadership training camp for Girl Scouts. In the early 1930’s she divided her Long Pond camp into two parts: the Girl Scout camp (Pine Tree) and Pinewoods Camp. Boston dancers referred to Pinewoods as “Long Pond” through much of the ’40’s. Lily Conant and May Gadd from New York had a role in naming the cabins and pavilions at the camp. Eventually Mrs. Storrow willed Pinewoods Camp to Lily Conant. For 30 years the Conant family ran Pinewoods Camp, until Pinewoods Camp, Inc. was formed in 1975.)

American country dance had been part of EFDS/CDS activities for years. As early as Cecil Sharp’s time, people were aware of American country dancing. Louise Chapin, Mary McNair, Gene Gowing, and others encouraged American dance. During the hardships of World War II, dance organizations which were focused primarily on dances from other countries (like England) had to justify their continued activity in part by including forms of American dancing. By the end of the war, Louise Chapin was teaching square dancing. (In the last week of her life, in 1944, Helen Storrow had attended a square dance, as well as an English country dance party.) At the same time, Ralph Page was teaching contras and squares in New Hampshire and the Herman’s were setting up Folk Dance House, teaching primarily international dancing, in New York City. All of these strands of dancing were becoming aware of each other by the end of the ’40’s. Contras and squares were becoming more “official.” Louise Winston, Ted Sannella (whose father-in-law, Irvin Davis, played an important role in CDS, Boston), and others were central figures in the American dancing of CDS, Boston.

Helene Cornelius started English dancing in 1951. She had been square dancing with Ralph Page before that, and as part of his evening dances, Ralph Page often taught a few international dances. Liking that international exposure, Helene started dancing other nights, including doing some Scottish. One of the nights at Scottish, Connie Wilkes came and gave a demonstration of Morris dancing, inspiring Helene and a friend to try a Wednesday English dance (then held at the Charles Street Meetinghouse in Boston). At that time Louise Chapin was teaching. There was usually a Morris class taught first, then country dancing was taught, and sometimes sword dancing after that. Usually about 20 people attended; the crowd was small. After attending two Wednesday dances, Helene and her friend were asked to be in a Christmas demonstration, directed by Lily Conant. Eventually Helene started going to the Boston weekend at Pinewoods, which was at that time held the last weekend in June. She liked English country dancing. Helene with her husband Arthur Cornelius for a time parted ways with Louise Chapin, but eventually Louise asked Arthur to come back and teach Morris, which he did. In 1963, Helene was asked to start teaching the regular Wednesday dances. As no one else wanted to do it, Helene agreed and continued teaching until she passed away in 2013. At that time only one and half hours of the evening were devoted to country dancing. However, that changed as dancers wanted more English country and as there was less interest in the CDS Morris classes.

The mid- to late-’70s saw a “changing of the guard” in the Boston English dance scene, with the deaths of many of the people who had been so instrumental in the early decades of the Boston Centre. Lily Conant died in 1973, Dick Conant, Sr. in 1975, Louise Chapin in 1978, and in New York, May Gadd died in 1979. (Dorothy Bolles had died earlier, in 1935.)

Over the years there have been many, many callers, musicians, leaders, and dancers: people instrumental in the ongoing success of the Boston Centre. This history of facts and people is only part of the story, for the other part of the history lies in the flow of music, movement, laughter, and community that are the threads that have held all this together over the years of the Boston Centre’s existence.

Written by Jean Krogh, 4/97 (with small updates by the web committee), drawing in large part on historical facts and perspective provided by Ed Wilfert. Many thanks to Ed and to George Fogg, Ellen Mandigo, Helene Cornelius, and the CDS archives, including Evelyn Lamond’s multi-volume chronicle of CDS, Boston, “Up A Double and Back.”